October Update on the U.S. Economy

Our proprietary Astor Economic Index® deteriorated somewhat last month and is showing slightly below average growth in the U.S. economy. 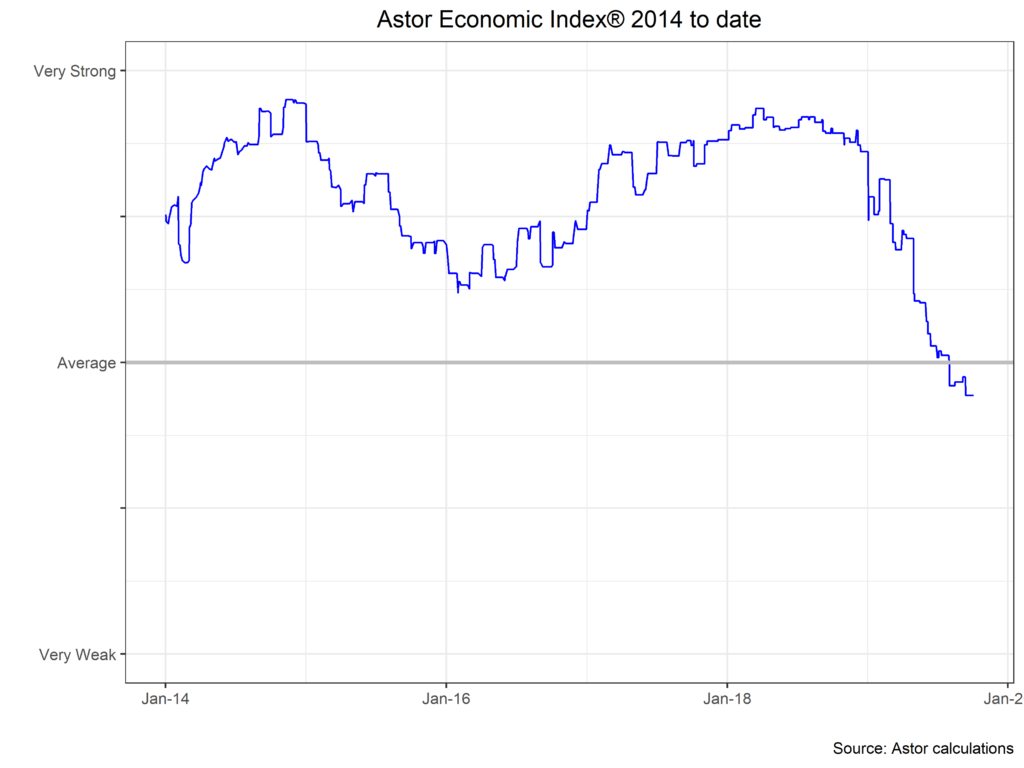 The labor market is the strongest thing going for the U.S. economy.  While the pace of jobs growth has slowed meaningfully since last year at this time, it’s important to recognize that enough jobs continue to be created to accept new entrants to the workforce.  Direct measures of labor market slack such as the unemployment rate or the underemployment rate both improved as did the prime-aged labor participation rate. After several months of acceleration, the rate of growth of the hourly wage dropped back last month.

I have a few early warning indicators I like to watch for – a hint that the labor market may be turning (See the chart below).  A well-known indicator is the weekly jobless claims number. It’s hard to see a recession without people getting fired. This indicator has been at very low levels for years with no sign of movement.  Another is the temporary employment services.  The argument is that it is easier to not renew a temp’s contract than it is to fire a full-time employee.  That series continues to be solid. 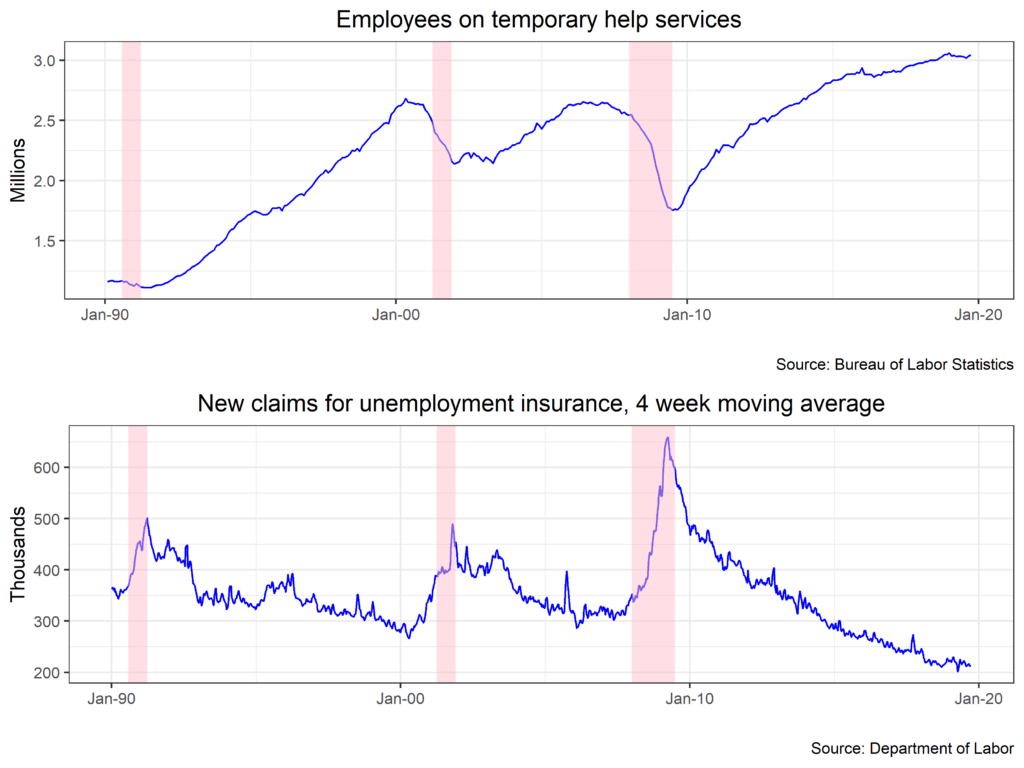 Some of the biggest data shocks of last month were the continued weaknesses in the ISM manufacturing purchasing managers index.  This index has weakened every month since March.  This is a so-called soft number which does not measure output directly, but instead, it asks purchasing managers at various companies if their business is getting better or worse. This indicator is prized because it is extremely timely and not subject to significant revisions, however, it is only important if the surveys become reality showing up in lower output or employment.

Indeed, we do see a clear drop in industrial production, although not as deep as 2016s energy sector slowdown.

An additional disappointment this last month was that the non-manufacturing survey was quite weak. In general, services tend to fluctuate less than manufacturing so if this trend continues, it could be disturbing for the economy.  (See both indexes charted below) 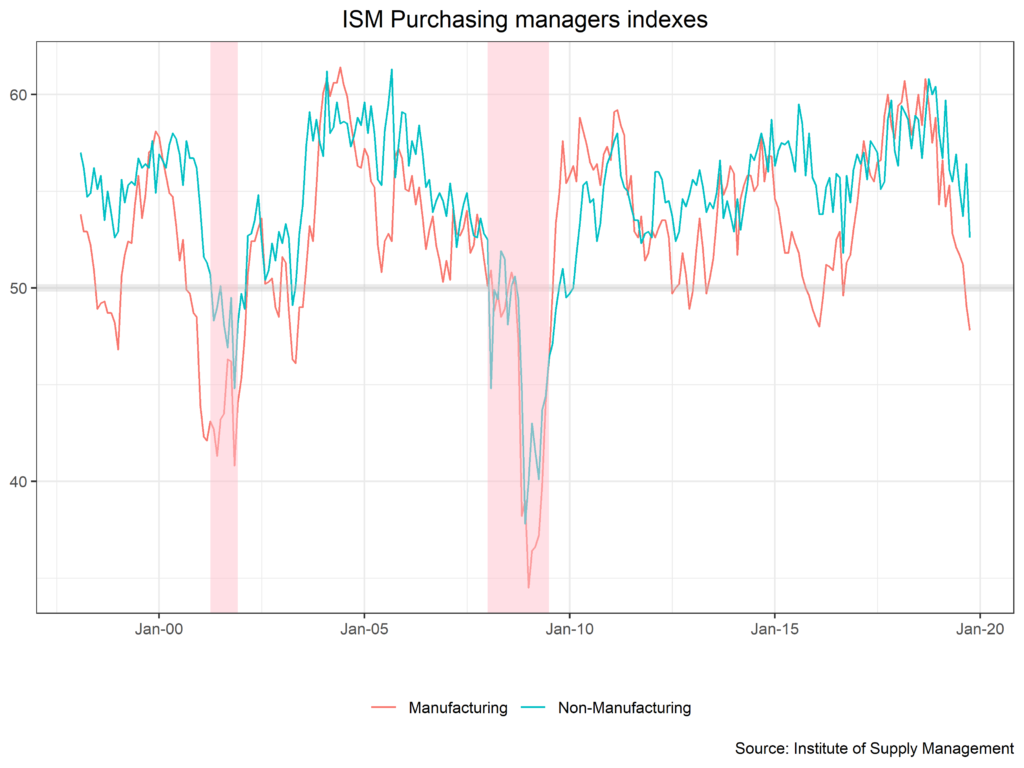 Fed Easing and The Repo Market

The Fed cut rates at its September meeting and it has another meeting  just before Halloween.  Judging by recent speeches, the fed sees the economy similarly as I do: near trend growth with risks to the downside from the international environment.  The weakening economy along with the increased uncertainty around policy making has led the fed to make two insurance cuts this year (or undo excess tightening from 2018, depending on your perception).  The usual interpretation of the fed funds futures market shows the market expecting an additional 0.50% in cuts over the next six months.

The main argument for further cuts is the desire to offset the uncertainty in the economy at a time when inflation still seems to be locked below its target.  I think that if we don’t see many voting members trying to talk the market down from expecting a cut, we will get at least 0.25% in additional easing in October or December.

There were countless power plants worth of electrons expended in writing up comments about the normally dull repo market and what its short-term funding pressures mean for the state of the financial system.  At Astor, we saw some small increases in our Astor Financial Stress Index (see below) which measures a range of yield spreads, as well as, the volatility of financial prices, but no signs of the wheels coming off.  The fed may increase its balance sheet to make sure that the transmission mechanism from the bank’s policy target to the broad range of interest rates remains intact.  Overall, I see the repo stress as a technical problem which the fed has the tools to handle, but we will be paying close attention over the next weeks ahead. 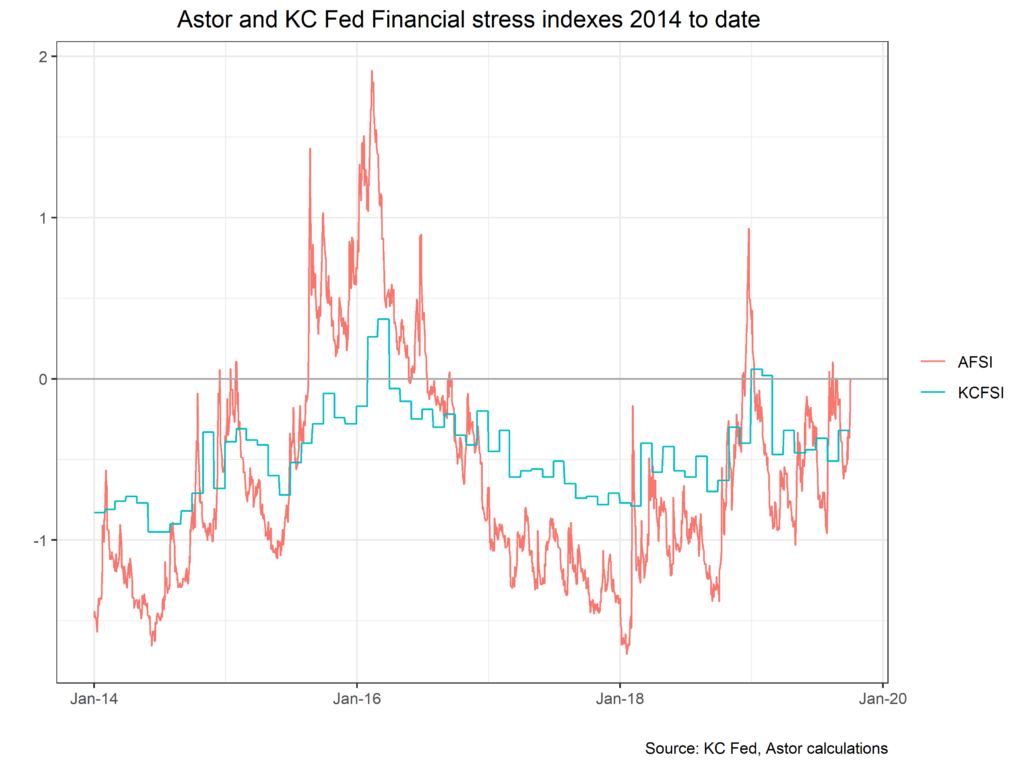 Overall, I still see U.S. economic growth as being slightly below potential though recent weakness is concerning.  The international environment is the most likely source of trouble.

Check out our collection of economic charts or download the Astor Economic Research App from the App Store.  As always, we at Astor will be monitoring the economy closely to inform our investment decisions.