November Update on the U.S. Economy

The Astor Economic Index, our proprietary nowcast of the U.S. economy has remained somewhat range bound for the past several months, and printed again this month at a level consistent with slightly below average domestic economic growth. We delve into some of the recent drivers of the AEI below. 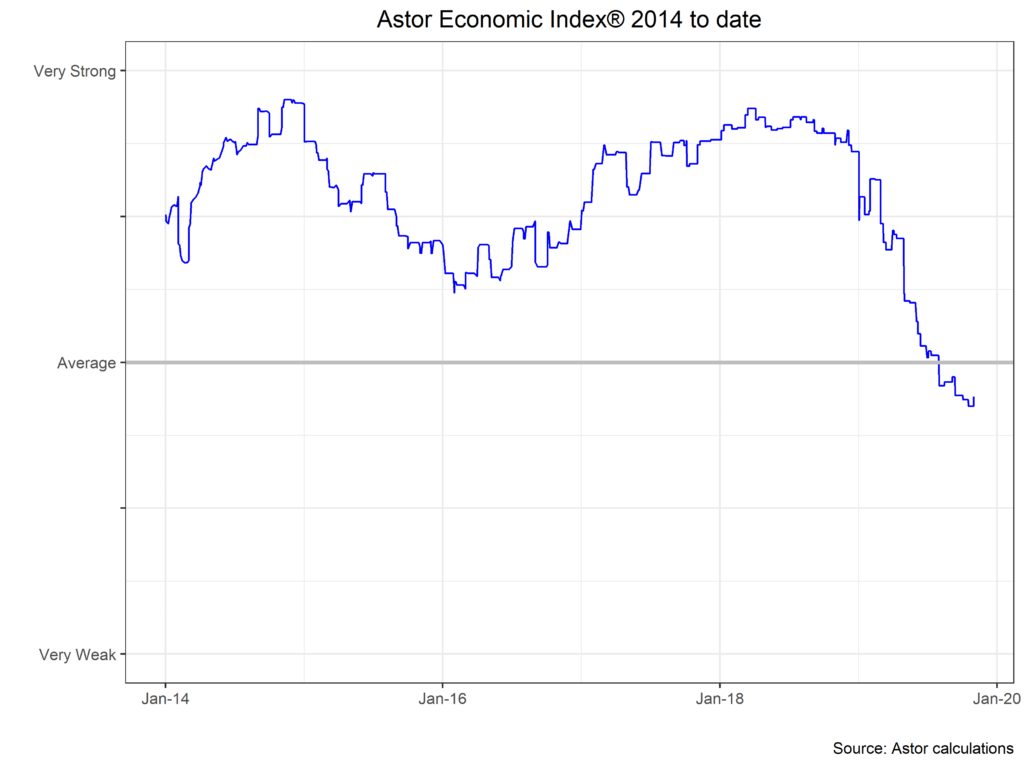 The Labor Market and Manufacturing
In aggregate, the U.S. labor market remains the justification for U.S. growth persisting in the near-term. The U.S. labor market’s strength continues mostly unperturbed by weakening global growth, declining U.S. investment and policymaking uncertainty. The October nonfarm payrolls report showed resilience to auto union strikes, and previous months were revised upwards. This is despite a weakening manufacturing sector, with the ISM purchasing manufacturing index printing below 50 (contraction territory) for the third straight month. Although manufacturing contributes to only about 10% of U.S. output, it has generally been a leading indicator in previous recessions. We will be watching closely for any sign of manufacturing weakness spilling over into the broader labor market. It is certainly possible that declining trade leads to a “manufacturing recession” a la 2015/2016, but without a broader economic downturn. 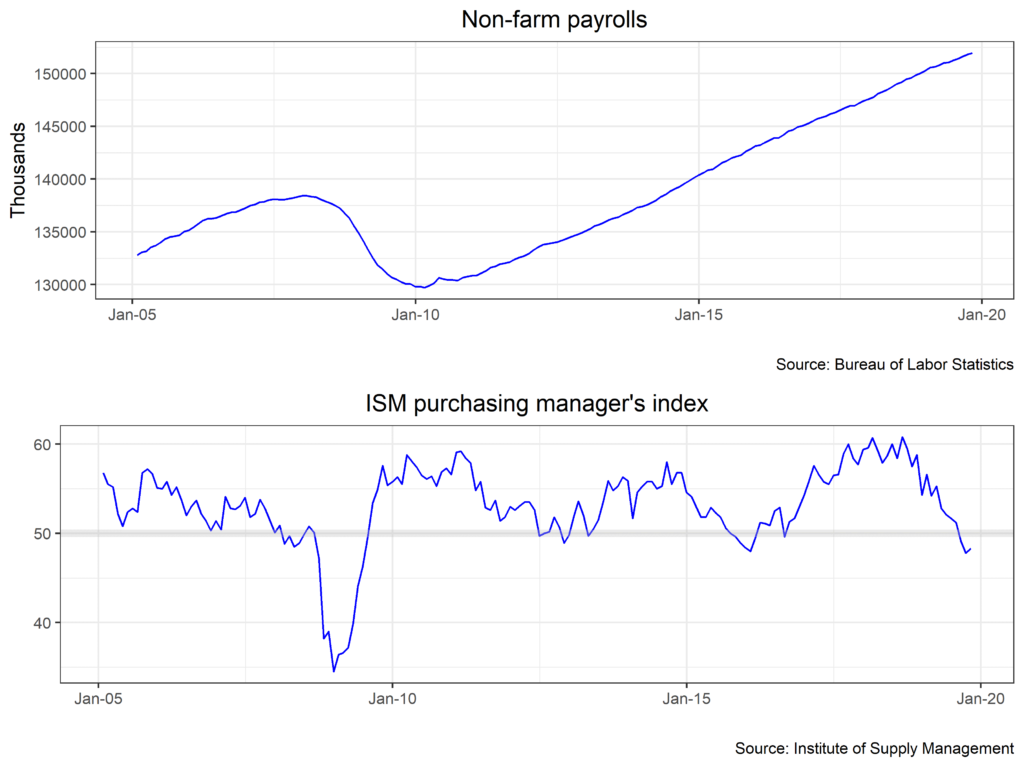 Investment Trends
As we’ve said in the past, the positive story in employment trends has fed into strong domestic consumption, with the U.S. consumer driving GDP growth. Missing from the expenditure-side of output is non-residential fixed investment. 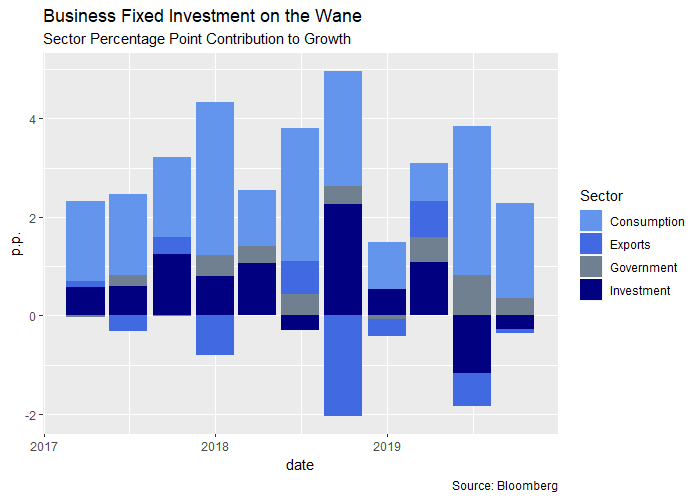 Survey based measures show that despite lower borrowing costs from the Fed’s midcycle adjustment, businesses are increasingly reluctant to invest in longer terms capital improvements until some of the uncertainty introduced by the trade war and other geopolitical events are removed from the picture. In particular, the decline in structures investment is consistent with the manufacturing slowdown. As such, the U.S. economy is on a less diversified footing for growth than in the past. 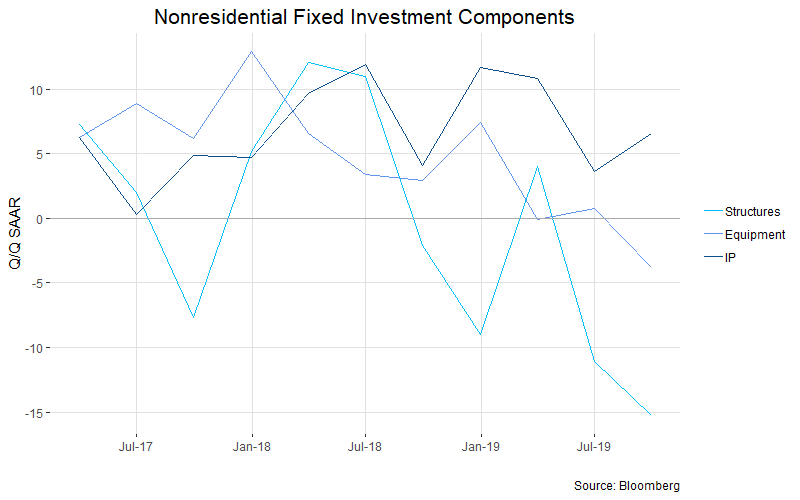 The FOMC cut rates 0.25% at its October meeting and meets again in mid-December. Chair Powell believes that if the data are consistent with the past quarter, then the current stance of policy will remain appropriate. That is, the mid cycle adjustment is at least paused if not over. Accordingly, the Fed Funds futures market is no longer anticipating cuts over the next six months. Should the spikes in the short-term financing rate seen at the end of the third quarter reappear in the fourth quarter, the Fed may permanently expand its balance sheet with purchases of T-Bills. 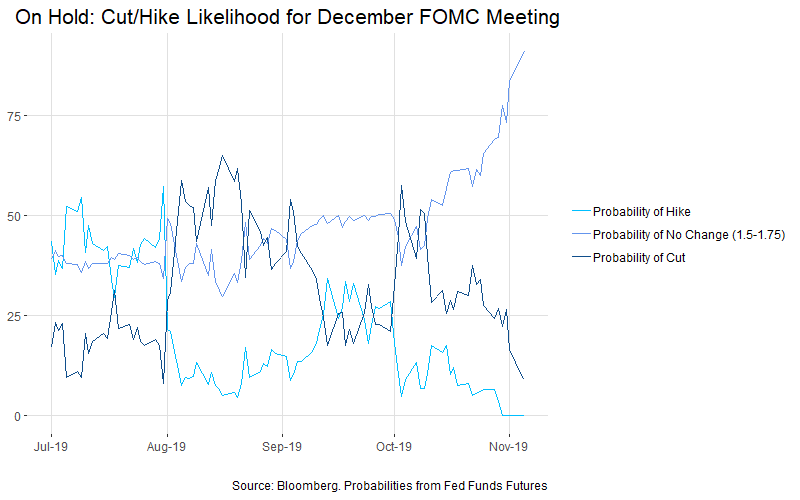 Public Now-casting Models
Despite differences in methodology, other efforts to now-cast the U.S. economy are broadly in line with the Astor Economic Index, showing a deterioration in growth to about trend/potential. Note that the AEI shows the U.S. economic situation relative to its own history, which we believe is more meaningful for risk asset expected returns, while the models below attempt to forecast actual growth.

The NY Fed’s now-cast for Q4 growth has slid considerably since August’s estimate of 1.57%, largely as a result of weaker advance-estimate manufacturing and survey data. Similarly, the Atlanta Fed’s declining estimate is driven by lower fixed investment and exports.

Check out our collection of economic charts or download the Astor Economic Research App from the App Store.  As always, we at Astor will be monitoring the economy closely to inform our investment decisions.

Looking Forward
In sum, the AEI indicates that despite the decline in the global environment, the narrative around the U.S. economy is mostly unchanged this quarter. The AEI’s reading comports with other now-casting efforts to take the temperature of the U.S. economy. Looking forward, we will continue to watch for further deterioration in the manufacturing sector, spill over impacts into U.S. consumer spending or the service sector, and any worsening or potential resolution to global geopolitical issues.