The oil market has grabbed the headlines for the last month and this week I made a presentation at the request of a client so I thought I would share a few notes on the blog.

We are in an example of the classic commodity boom and bust cycle. This cycle holds for commodities who’s production requires a substantial amount of investment to produce. So I am thinking more of things like oil, where there is a great deal of capital required to explore, produce and transport oil.

The boom and bust cycle is cartoonishly illustrated below. Something increases the demand and hence the price, new, less effect producers step in, the extra supply reduces the price but the reduction in price does not stimulate enough addition demand to take up all the capacity of the new producers and some of them go out of business. I don’t think I need to tell you where I think we are in the cycle.

While many of us learned in economics that energy demand does not respond very much to price changes in the short run (I need to heat my house in the winter no matter the price) but it is less well appreciated that the demand side is not that sensitive to short term price changes either. This interesting paper by Soren Anderson and his colleagues shows that existing wells continue to pump in Texas despite price drops, though exploration drops.

I also think that the debt financing of smaller, less efficient producers has a role to play too. A producer who borrowed to drill a well is stuck making interest payments and is better off drilling at a loss than leaving the oil in the ground. So we will likely see wells which come to the end of their lives go unreplaced rather than massive amounts of new wells scrapped. We are seeing modest declines in rig counts already.

All this is getting around to me saying oil will probably not stay at $50 a barrel for long. Though I’m afraid I will need to leave “long” undefined.

The industry is not dramatically out of balance. The chart below shows the difference between supply and demand, as calculated by the International Energy Agency. The oil market is murky and these numbers could be off, but they suggest that only a modest decrease in supply or increase in demand will move the market closer to balance, eliding over the issue of high inventories. 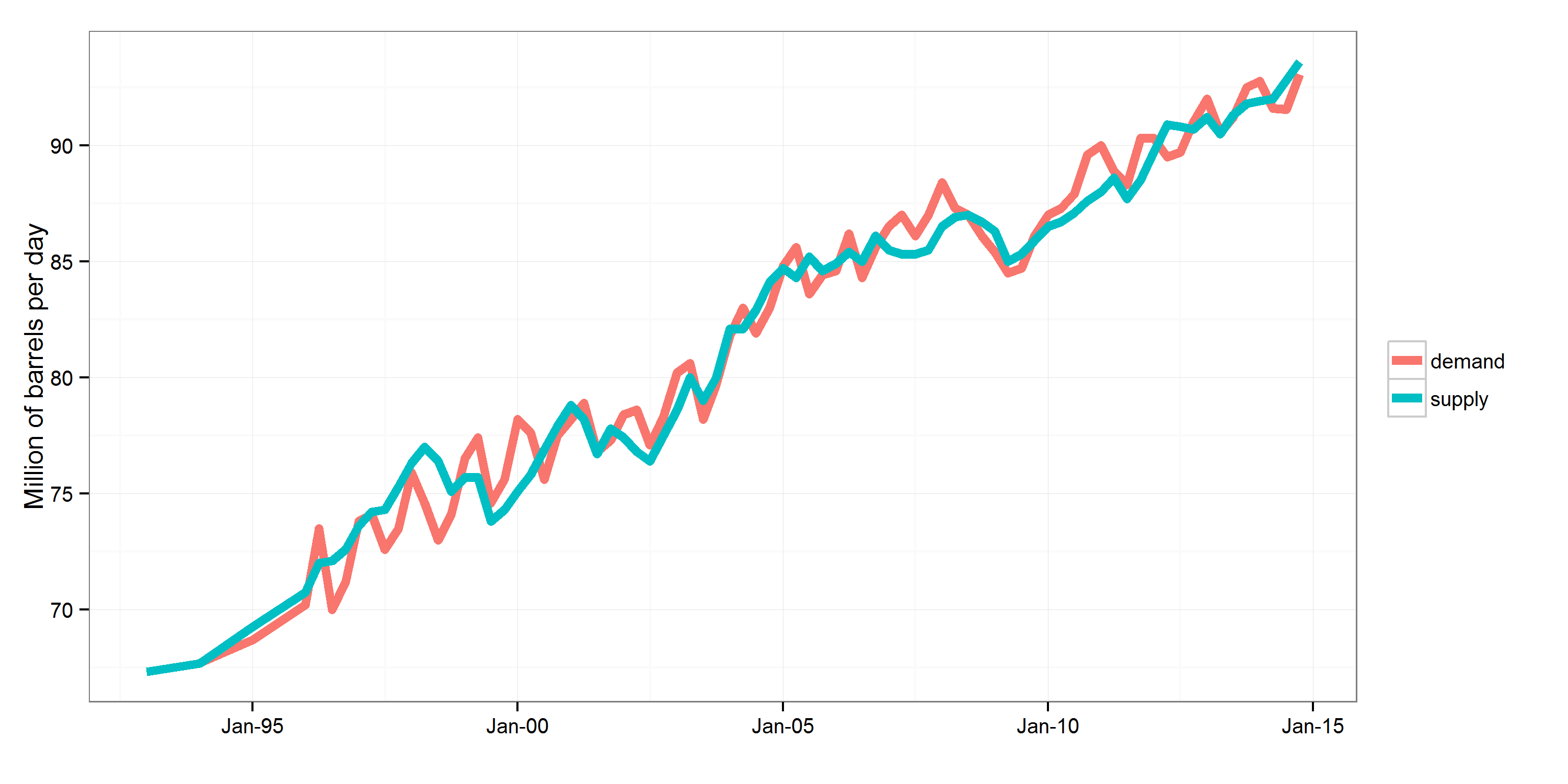 Where might the price of oil settle? Well, sadly, I don’t know that either. And in the short run markets can overreact. In fact, given the recent high levels of volatility there would have fairly high expected returns to induce buyers to brave the risk (that is, the price must be low enough compared to fair value, even higher if no one knows what “fair value” is). Suggesting that more declines are possible.

However the chart below, (from the IMF Direct blog via an excellent post by James Hamilton on the subject) while complicated, is worth the effort. On the X axis we see millions of barrels per day, on the Y axes the breakeven range in terms of dollars per barrel. So, one way to think about it would be to say: demand has been between 90 and 95 million barrels per day for the last several years, and the break-even to get that production is someplace in the $60 – $80 / barrel range. For what its worth, that is consistent with the prices of crude oil futures for delivery two years hence. 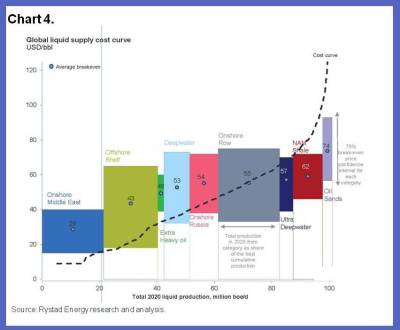 While good news for most Americans, the oil price drop is not an unalloyed boon, even setting aside the possibility that it signals a decrease in global demand. According to NYU’s Aswath Damodaran The listed companies in the US spent about $900B on capital expenditures in 2013.  (Note that this $900B represents a bit under half of all private, nonresidential fixed investment).  That is a large number, even for a $17T economy. 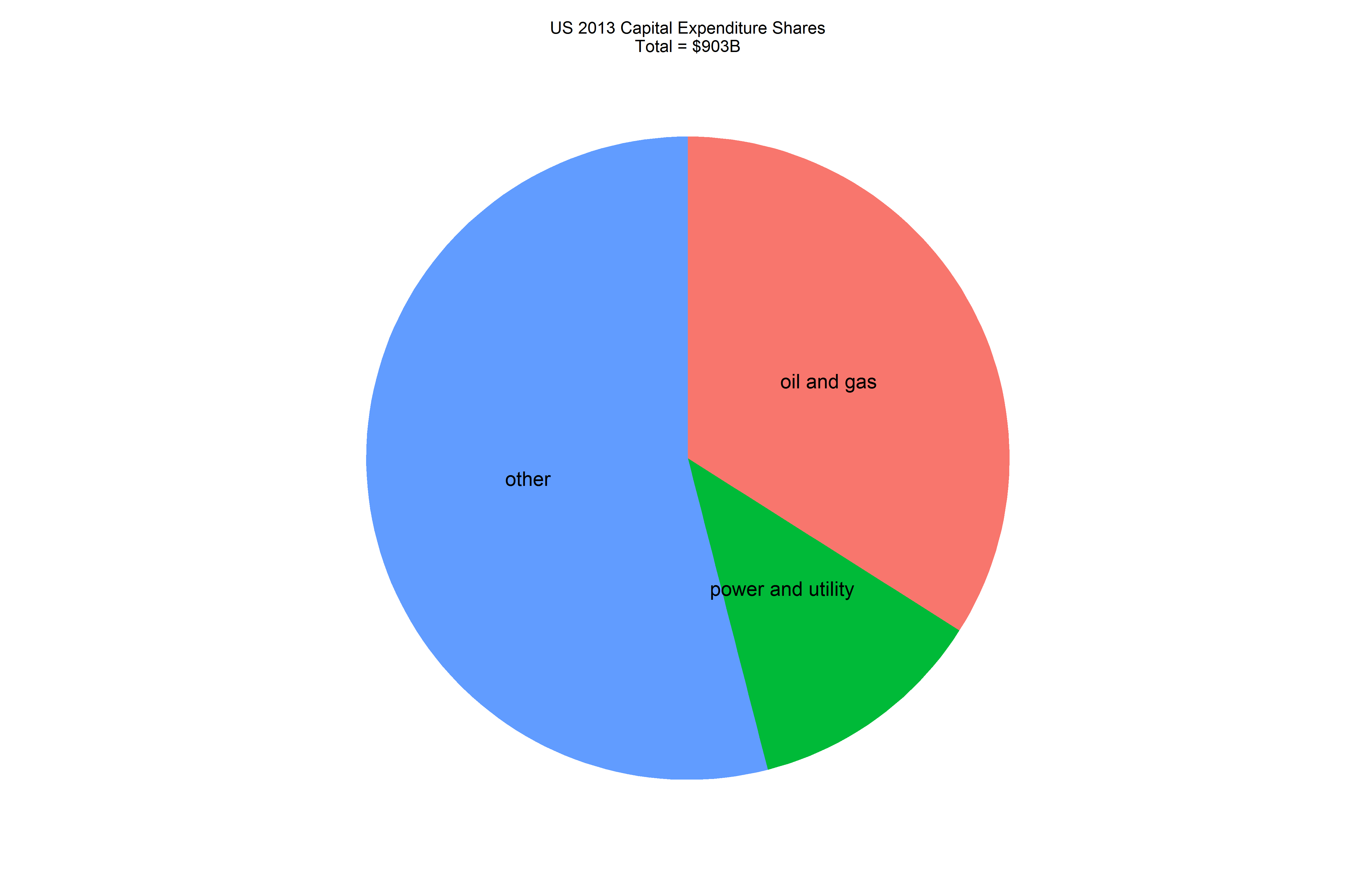 Were that share to fall by half and the power and utility share to increase by half that would imply an investment drag on the economy of about 0.6%. This should be more than made up by increase in consumptive power by households, especially poorer households with a higher propensity to spend. Nevertheless, it is worth bearing in mind that there effects going in both directions.