The Astor Economic Index® (“AEI”) improved once again in the month of May, ticking up to a post-pandemic high, and nearing levels last seen in 2019. The reading is consistent with the general macroeconomic narrative of the U.S. economy, with flush households, strong demand and burgeoning external support. Although GDP growth seems to be on solid footing for continued growth, the labor market and inflation dynamics provide reasons to pause and think more carefully about the domestic trajectory. 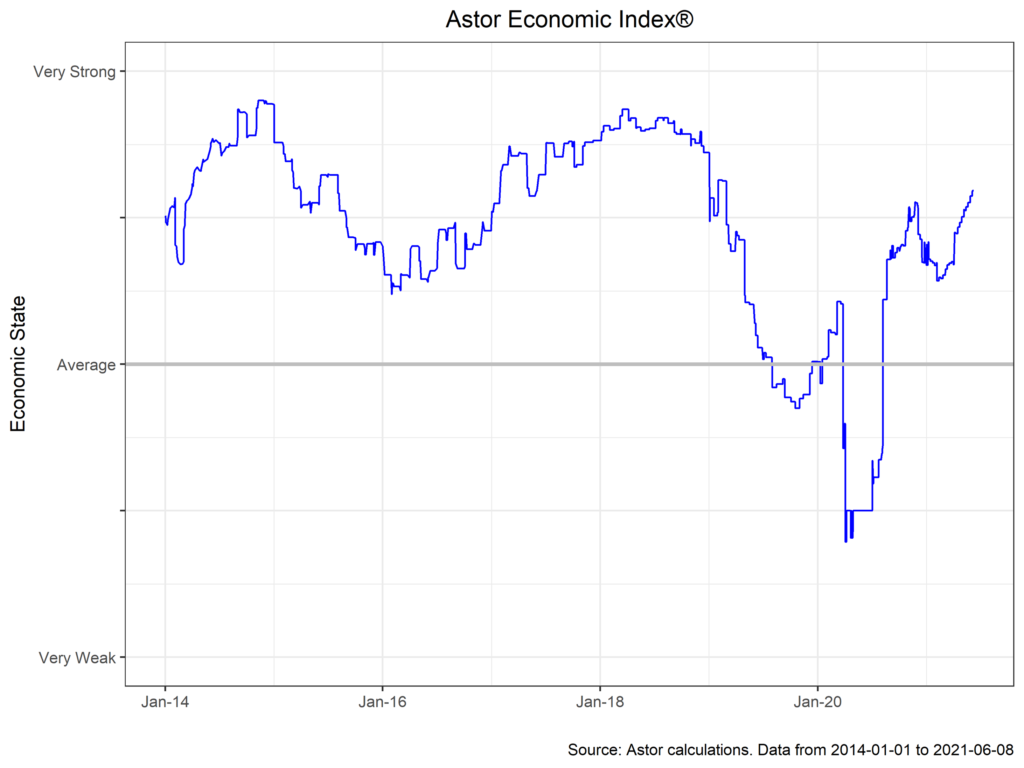 The labor market is at an interesting crossroads that is a bit at odds with history. May’s non-farm payroll number came in a 559,000 m/m, a bit lower than forecast but much better than April’s soft print. U-6 unemployment, which includes discouraged and underemployed workers, ticked down slightly to 10.2% from 10.4% in April. Much of the gain in payrolls came from shutdown affected industries like restaurants. As we have said in the past, the improvement is strong, but not quite as good as one might expect given the backdrop, hinting at constrained hiring from childcare and unemployment benefits. 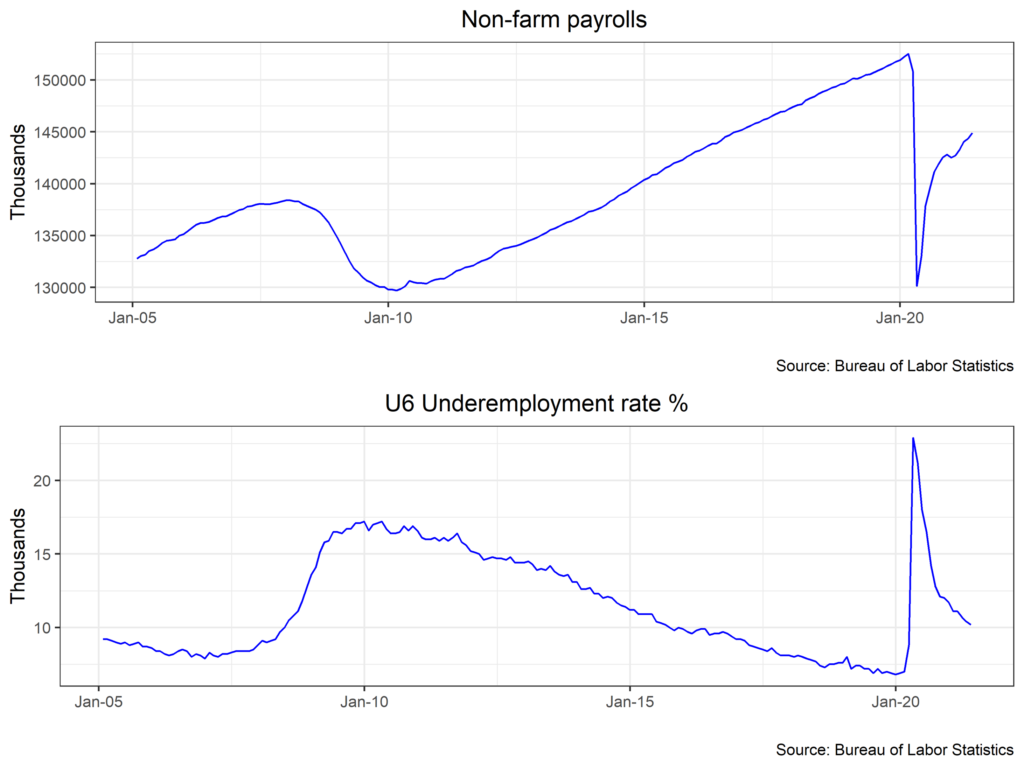 On that front, the bottleneck for stronger non-farm payrolls seems to be, to some extent, a lack of new entrants into the labor market. Job openings typically go up as the unemployment rate goes down: think of 2020, when unemployment was at record lows and employers were struggling to find workers. Despite the unemployment rate remaining more or less stagnant, job openings (JOLTS) printed at a historic high of 9.3m, with about one job opening for every person without a job in the U.S. The extent to which labor is waiting for more competitive wages to move off the sidelines, and the degree to which businesses will pass on those costs to consumers bears close watching, as it would likely contribute to more permanent inflation. 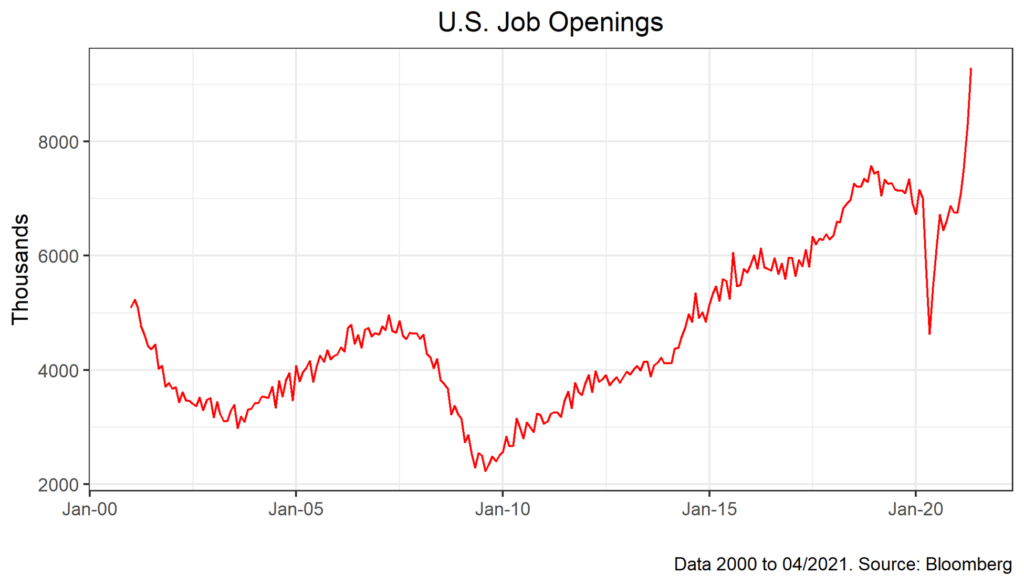 Speaking of inflation, we will have to wait until later this week for new inflation data from the BLS, with consensus estimates suggesting a print north of 4% y/y, but in sum the evidence is still broadly pointing to transitory price pressures. The Federal Reserve Bank of San Francisco publishes two separate inflation indexes based on categories that are sensitive to COVID-19 closing and reopening (e.g. hospitality, used cars) or insensitive. The chart below depicts that much of the price pressure in the economy are from the former category. The baseline expectation is that these pressures should ease as supply ramps up to meet increased demand and consumer behavior normalizes. 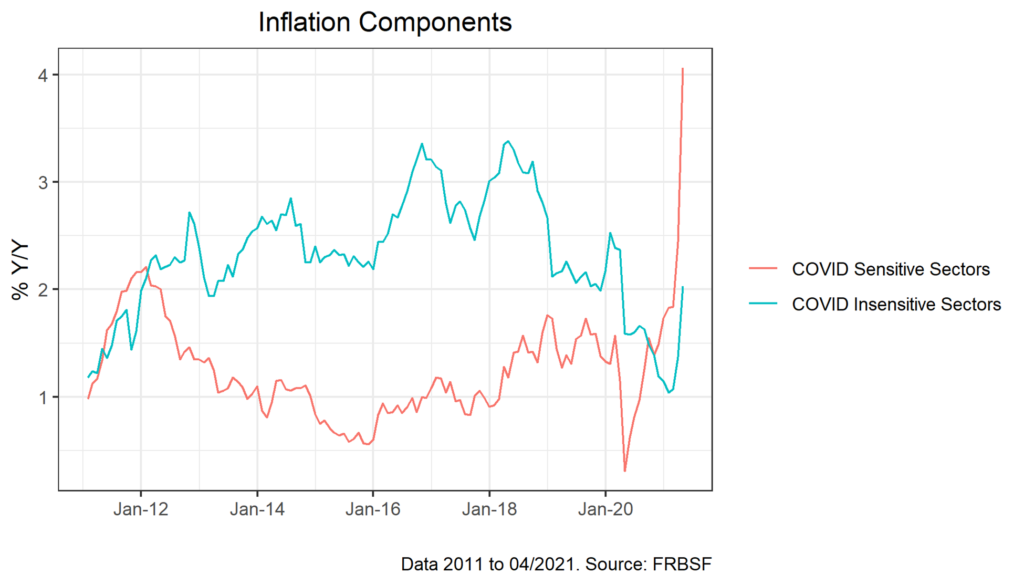 The Federal Reserve has said repeatedly that they see current inflation as transitory and even desirable to the extent it helps the Fed meet its new average inflation targeting framework. As a result, high near-term inflation prints and supplier price pressures are unlikely to sway the FOMC from their low for long stance. What would worry the Fed, however, are consistently higher inflation expectations, which are thought to drive underlying inflation dynamics. The chart below depicts three types of inflation expectations, all of which have moved up over the past few quarters and are near 2015 highs. Of course, it is worth noting that inflation expectations have frequently overshot realized inflation by some margin in the past. 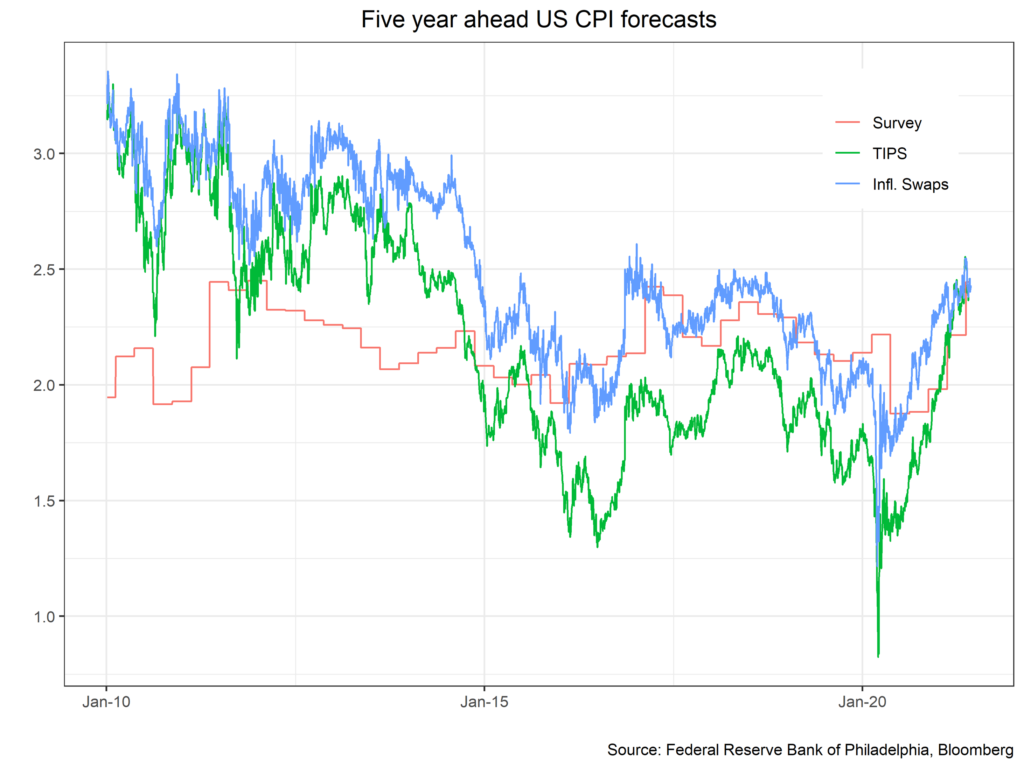 In aggregate, the U.S. economy remains on the right trajectory following a long and painful pandemic. While we are relatively comfortable vis-a-vis inflation prospects over the next year, we will be closely watching underlying dynamics for any sign of more sticky price increases. We will also be watching the labor market for more constructive developments over the coming months.