July Quick Read on the US Economy

The economic news improved somewhat from my last update.  The labor market looks more solid than it did a month ago and there are some signs the manufacturing sector may have found it footing.  I believe the Brexit vote will likely have only a modest direct impact on the US, but will make all observers less confident of their predictions for global growth.  This summer, the fed may try to convince the market that it will hike again in September, but my guess is that the December will be the earliest.

Our latest reading for the Astor Economic Index® (“AEI”) is higher than last month, and at near the highest level posted this year.  I still see the US as currently growing above average. The AEI is a proprietary index that evaluates selected employment and output trends in an effort to gauge the current pace of US economic growth. 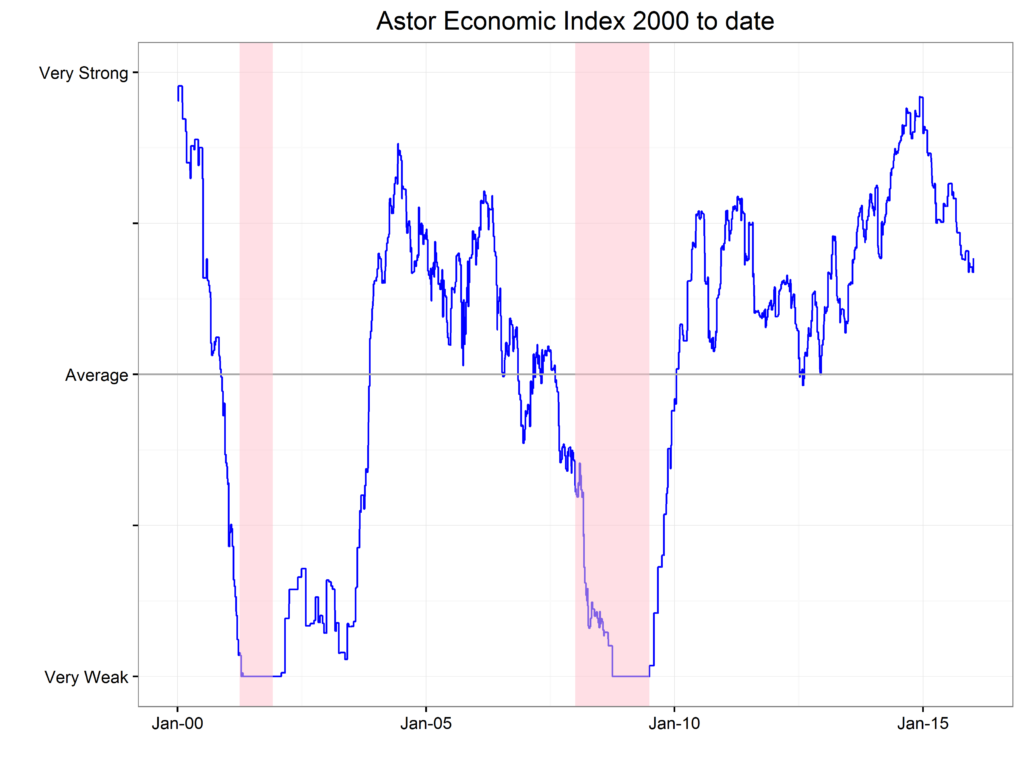 The labor market has been doing its noisy best to upset the stomachs of economists.  June’s payroll number showed a solid recovery from the weak numbers posted for April and May.  That being said, smoothing the series somewhat by looking at year over year percentage change shows that the US economy is still adding jobs but at a somewhat slower pace than has prevailed over the last few years.

The nowcasts produced by the Federal Reserve banks of Atlanta and New York are both still showing stronger growth in the second quarter than the first.  The Atlanta Fed is currently estimating 2.3 SAAR and the New York Fed 2.1.  These are both slightly weaker than last month’s estimate.  Both have been updated since the employment report.

The biggest economic surprise of the year has been the vote for the UK to leave the European Union.  At Astor, we were pleased to provide rapid reaction to this event on our blog on the morning and afternoon of the vote.  I think our analysis holds up well: see CEO Rob Stein’s take here and mine here.   As some of the dust has settled, short term implications for the UK economy are seen as dramatic by many economists.  For example, the panel of economists surveyed by Consensus Economics is now forecasting 1.1% growth in 2017, down from a 2.1% forecast last month.  Reductions for growth in the Eurozone are smaller.  Consensus Economics now forecasts 1.4% in 2017 down from 1.6%.  These same economists are not currently seeing significant direct effects on the US or the rest of the world.  The swift resolution of the UK leadership contest (with a new Prime Minister this week as opposed to the September time table originally announced) may offer grounds for optimism that a deal may cut short the period of uncertainty.

I see Brexit uncertainly leading to reduced investment by both firms and households as the primary channel affecting UK GDP.  To the to the extent that the uncertainly will have sustained spillovers into the financial markets it could have indirect effects on the US.  For example, the dollar initially rallied after the vote, but is now about the level that obtained in early June.  Should the dollar appreciate against our trading partners, it would be expected to make exporting more difficult.  In my opinion, the largest effect, however, seems to be in government bond yields.  US ten year yields have moved down 25 basis points to a yield of around 1.50% as this note is being written.  While, some of this may be safe haven demand that one can hope will be reversed as a path forward emerges, there are few of the other typical signs of investor fear.  Investors willing to take 1.5% for 10 years may be foreseeing long spell of a worrying lack of attractive opportunities for investment in the US and abroad.

When last we heard from the fed, their rate-raising plans were put on hold by the poor payroll numbers in April and May.  Does the decent report for June portend another hiking scare?  I think it is too soon to tell.  My interpretation of their speeches is that for the fed to raise rates they need to be convinced that the labor market is at full employment and that inflation will return to target in the medium term.  The last report has some points for both sides.  If the decision was finely balanced before, then in my opinion the Brexit vote strengthened the doves’ position.  Neither inflation nor the labor market are likely to see a boost because of it, and I imagine the decline in yields has the fed’s attention.  My guess is that a few hawks will try to make the case for a hike over the summer but that the fed will not hike before December.  For what it’s worth, the most common interpretation of rates implied by fed fund futures market sees only a small chance of a hike before the end of the year, as opposed to the situation in January when more than one additional hike was priced in.  A sustained return to the relatively robust labor market we saw over 2014-2015 would increase the likelihood of a hike.

Overall, I am relieved the labor market seems to have bounced back from a weak April and May, but I will feel better about the economy if we see this strength confirmed over the next few months.