As the pandemic goes, so goes the United States’ economy. To the extent that public health measures move in lockstep with the pace of COVID-19, this month’s data reflects that reality. With restrictions easing in most states, macroeconomic fundamentals have improved accordingly. Of course, as epidemiological data shows, the pandemic is far from having run its course, and some localities have been forced to reverse previous easing measures. Still unanswered, moreover, is the question of structural impacts to consumers and industry across the country, and so we explore potential second order effects later in this note.

The Astor Economic Index ® ended June unchanged from the previous month. Consistent with the reopening narrative, the AEI has since begun to tick up as the data improve and is now between its nadir and pre-pandemic levels. 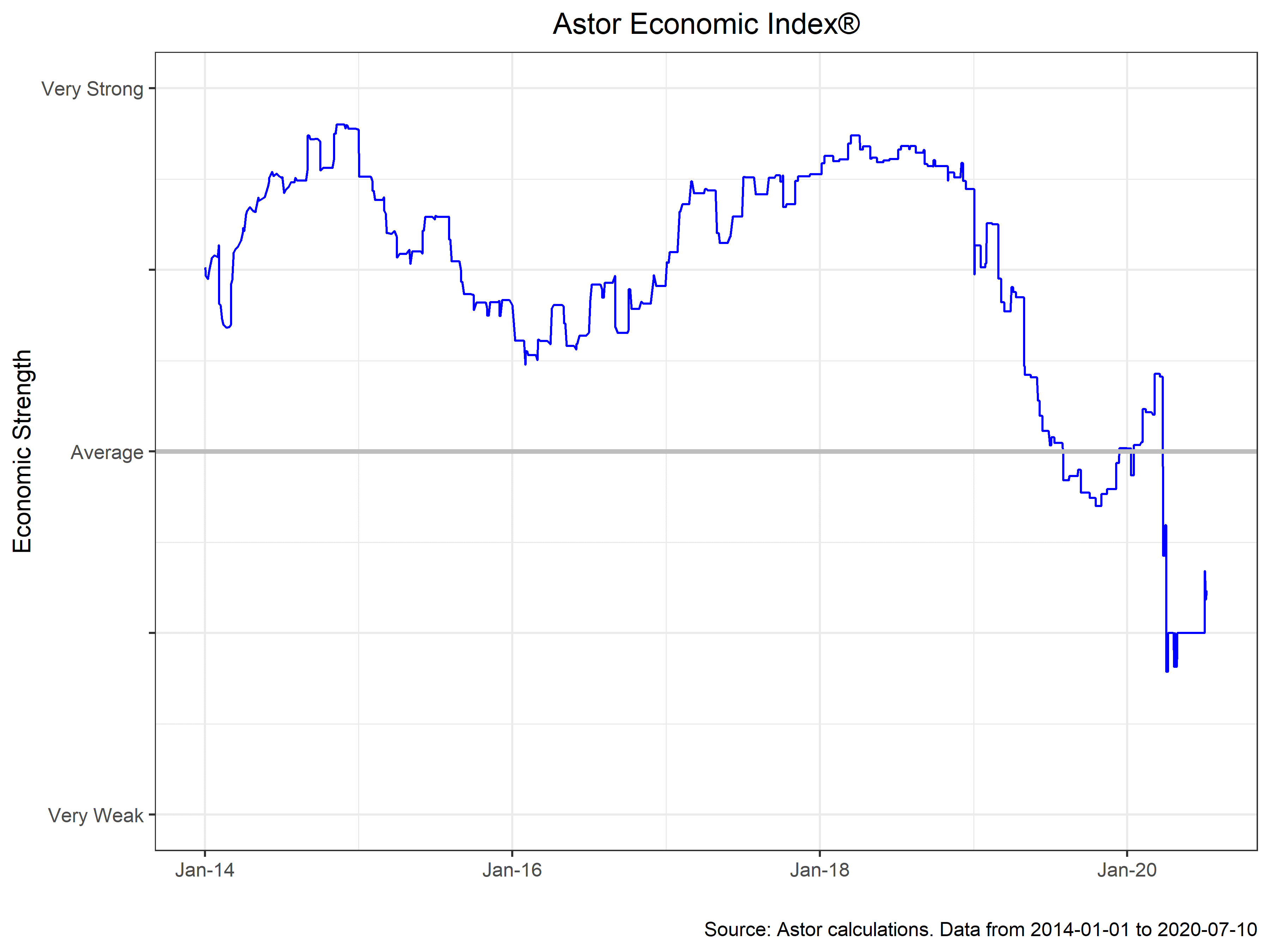 Purchasing manager indexes have moved steadily upwards into expansion territory (above 50), with ISM manufacturing rising to 52.6 (from 43.1 the prior month) and ISM non-manufacturing printing at 57.1. Markit PMIs were less sanguine and remained in contraction territory. Unsurprisingly, accommodation and food services led the charge in PMI numbers, which also highlights the risk to a fragile resumption of activity should viral outbreaks prove persistent.

Non-farm payrolls continued the retracement of crisis layoffs with an above consensus 4.8m jobs added in June. Despite strong adds in back-to-back months, the U.S. labor market still has distance to cover, with approximately 15m net jobs lost to date in the pandemic era. Moreover, expectations for future months are cloudy, as jobless claims are stubbornly elevated relative to the path of non-farm payrolls, suggesting continued layoffs and firings. Job losers are increasingly classified as permanent (versus temporary layoffs) by the Bureau of Labor and Statistics. 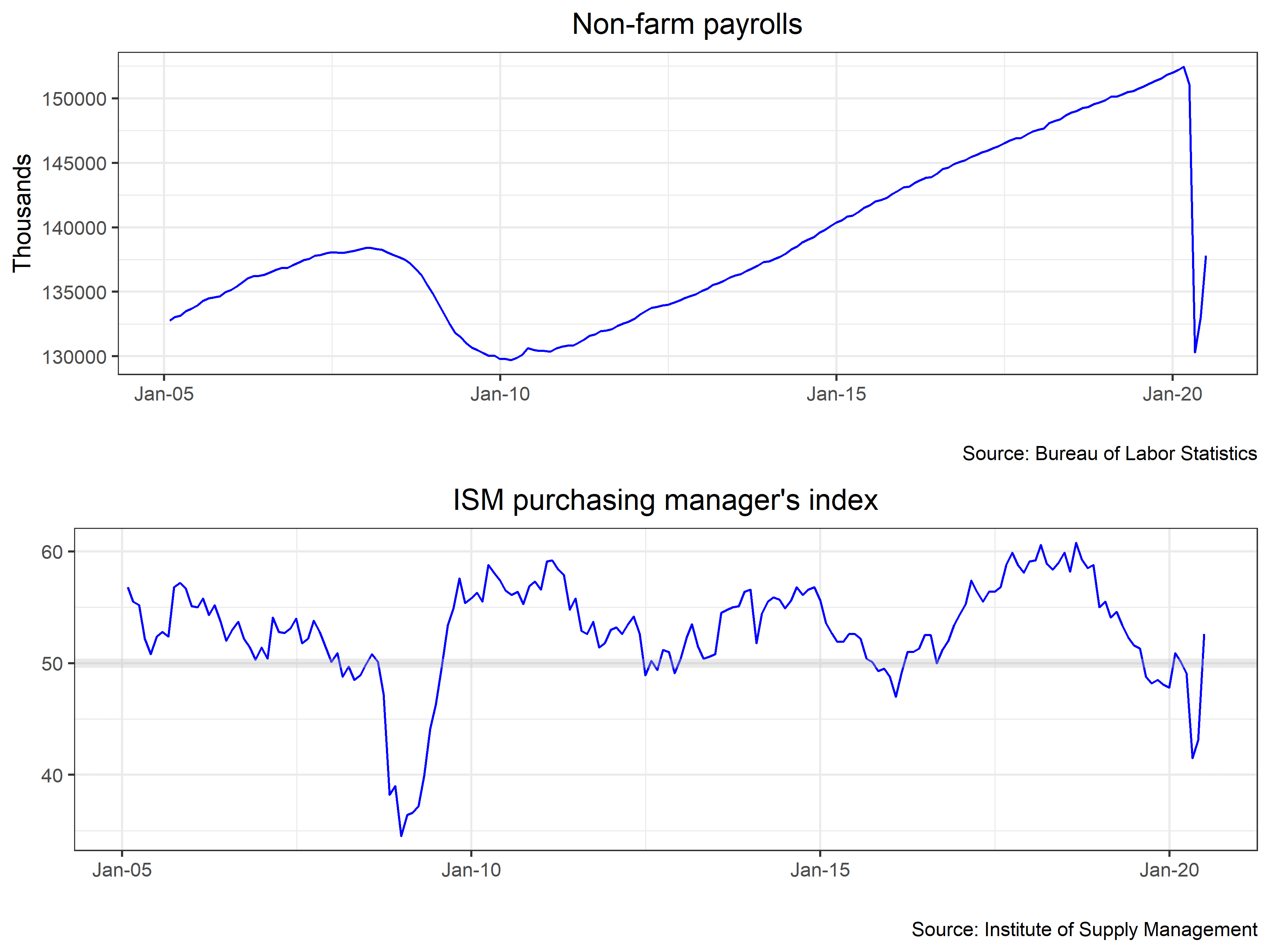 Higher frequency data also offers a more cautious appraisal than PMIs. OpenTable data for the US as a whole depicts diners continuing May’s return to restaurants though the first half of June but leveling off after that. In states where SARS-CoV2 is spreading widely, reservations have begun to decline, a sign of the potential economic impact of restrictions being put back in place. 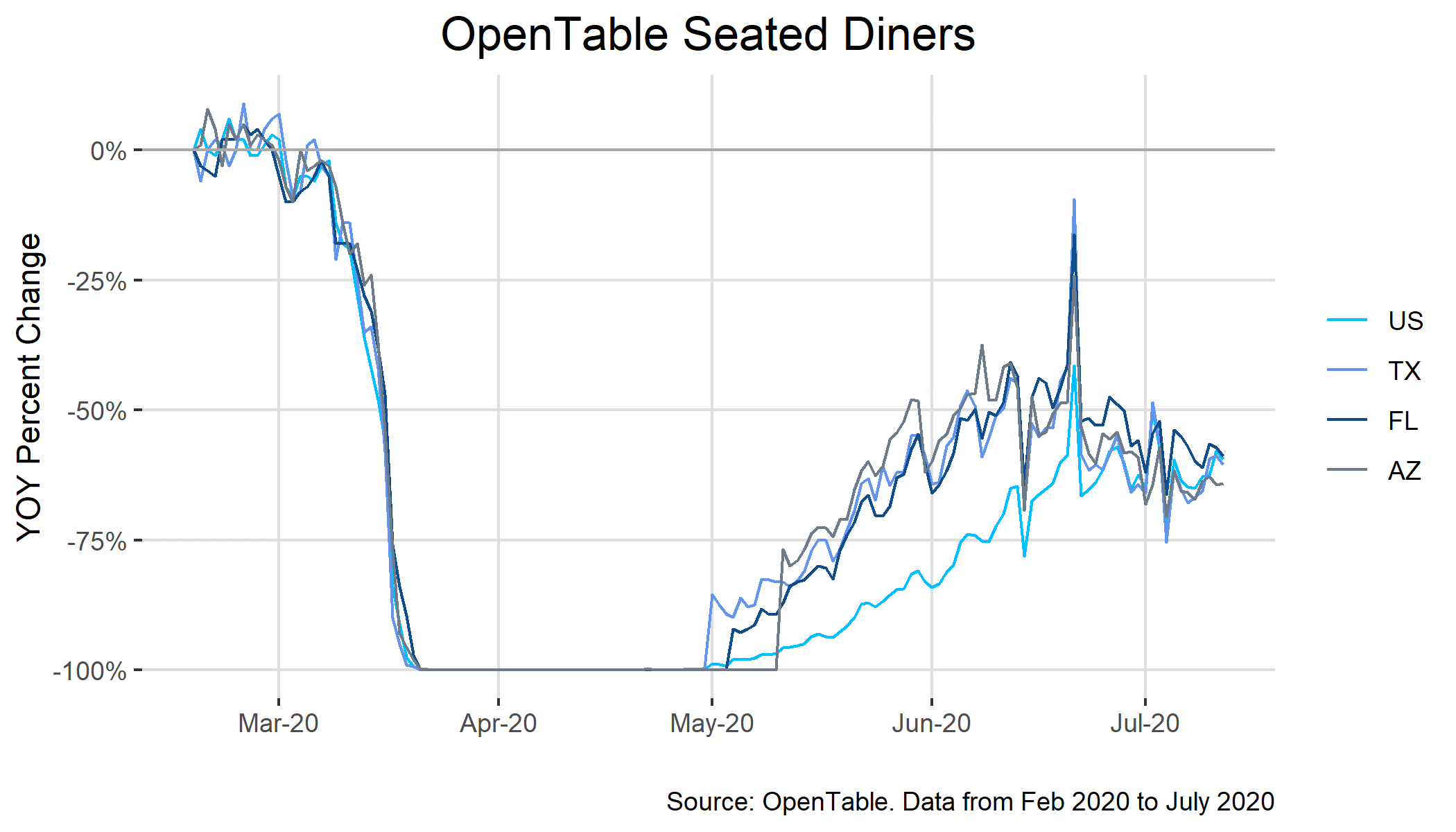 As we lift suppression, the crucial question to be answered is if enough damage has been done to push the economy into a longer lasting recession. If, for example, the pandemic was to end tomorrow, what would the next 12 months look like for economic growth in the United States? To date, the data suggest an economy that is resilient but nearing its breaking point, and it seems likely that fiscal and monetary support for consumers and business has kept structural damage to a painful but tolerable level, with an accordingly brief post-crisis recession. The Bloomberg Corporate Bankruptcy Index, which considers both number of bankruptcies and dollar amount of liabilities, remains well below Global Financial Crisis highs.

Keynes famously wrote that “Economists set themselves too easy, too useless a task, if in tempestuous seasons they can only tell us, that when the storm is long past, the ocean is flat again”, and so we pause here to consider other possible paths forward for the U.S. economy. While COVID-19 persists, the U.S. is likely to find itself in a system of multiple equilibria where the pandemic is kept at an elevated level with moderate restrictions in place, and the economy well below potential but not in outright freefall. The long-term impacts, then, rest squarely on the shoulders of policymakers. As long as the federal government (and the U.S. taxpayer) is willing to bankroll shuttered businesses and effectively administer and render support, and the Federal Reserve continues to sees junk debt as a solid investment, it seems feasible that the U.S. may yet emerge from the pandemic licking its wounds but able to fight another day. On the other hand, should the pandemic continue indefinitely, and aid evaporate, the second-order effects from the pandemic will likely be prolonged and painful.