The last act of the Quantitative Easing play

If the global financial crisis was a play, the Fed is getting ready to begin the last act.  This fall, the extraordinary support given to the US economy likely will begin to unwind.   Such a significant move raises the question: What is the outlook for the Fed for the rest of the year and into 2018?  In large part, of course, it depends on the evolution of the US economy. But by closely reading Fed statements, we can see the broad outlines already.  It seems likely that the Fed’s balances sheet will be substantially higher and interest rates substantially lower than would have been considered normal before the crisis.

How we got here

Ten years ago this summer, two Bear Stearns hedge funds failed.  These were telltale signs of the imbalances that dominated the US financial markets, whose unwinding would lead to the global financial crisis.  Twinned with the bursting of the housing bubble, the financial crisis plunged the US into the worst downturn since the great recession.  The Fed started cutting interest rates in September 2007; rates reached 0.25 in December 2008.

The Treasury and the Fed enacted an alphabet soup of special programs (TARP, TALF) to buy assets and shore up this or that bulkhead in the leaky boat the financial system had become. But what about the broader economy?

At the time, it was widely thought that short-term rates could not get below zero, the so-called Zero Lower Bound.  As the effects of the global financial crisis have lingered around the world. we have learned that, unfortunately, modestly negative interest rates are in fact possible.

But in 2008 the Fed was not ready conceptually to impose negative interest rates on the US.  That left them with an economy crying out for help, but their preferred tool already fully employed. In other words, the Fed had already floored the gas pedal, but still needed to add power.  What to do?

They settled on the related concepts of large-scale asset purchases combined with forward guidance on the level of interest rates.  Forward guidance relates to language from the official FOMC statements and speeches about the need to maintain a highly accommodative stance for an extended period of time.   Paired with this were large-scale asset purchases known as Quantitative Easing (QE).  The Fed expanded is balance sheet dramatically as can be seen in the chart below. 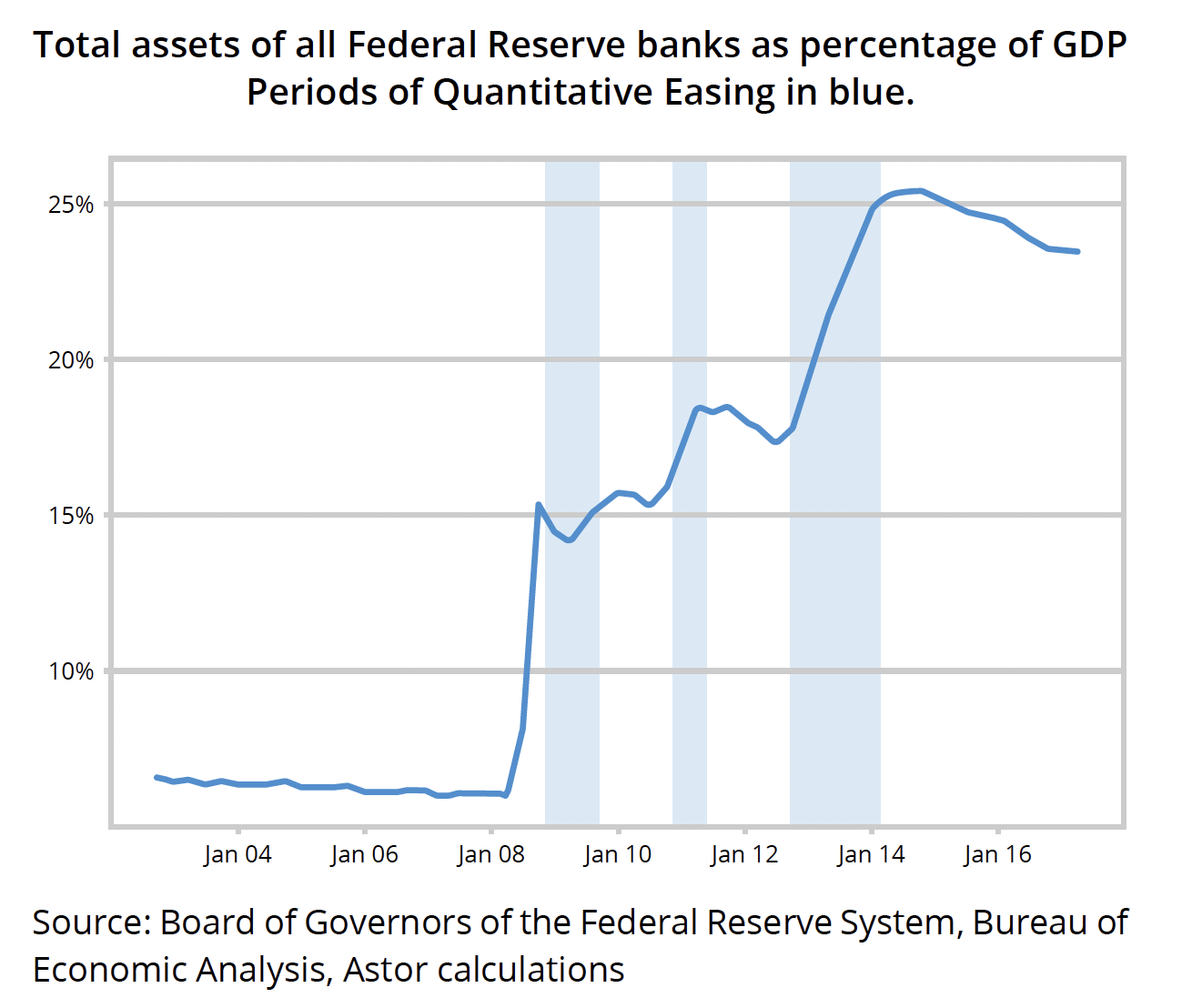 This shows the size of the Fed’s balance sheet as a fraction of GDP.  Before the crisis (marked in pink), the Fed had a much smaller balance sheet as a percentage of yearly output than it does today. The substantial expansion in the balance sheet occurred when we were years into the recovery.

Where is the balance sheet going?

While the Fed has not added to its balance sheet since 2014, it has been reinvesting the interest and principal payments received to maintain the balance sheet at a steady level.  Direct additions to the balance sheet as a tool of monetary policy are fairly new in the US, and, in our view, the Fed is not completely sure how allowing the assets to run off will affect the economy.  Hence, the long wait to begin to unwind until the Fed was fairly assured that growth is robust.

In my view, someday soon, likely this year, they will cease reinvesting all principal and interest payments and instead reinvest only the amounts that exceed a sliding cap.   (See the FOMC’s deliberation over the timing in the minutes of the June meeting).  The cap will start at $10 billion a month, so in the first month the Fed will reinvest whatever the principal payments are, less the $10 billion they are going to allow to roll off.  The cap will rise quarterly to $50 billion. (The Fed’s most recent comment on normalization can be found here.)

Given those numbers, the Fed’s balance sheet will shrink by about $300 million in the first year and $600 million in subsequent years. These are large numbers, but the chart below shows that the Fed’s balance sheet went from about $0.8 trillion to about $4.5 trillion today.  But where will the balance sheet settle? In our view, it will likely be much larger than a linear extrapolation from the old line.  Former Fed Chair Ben Bernanke has cited (in this blog post) several reasons why the balance sheet may need to be around $2.5 trillion by the middle of the next decade – similar to estimates at this Fed study. 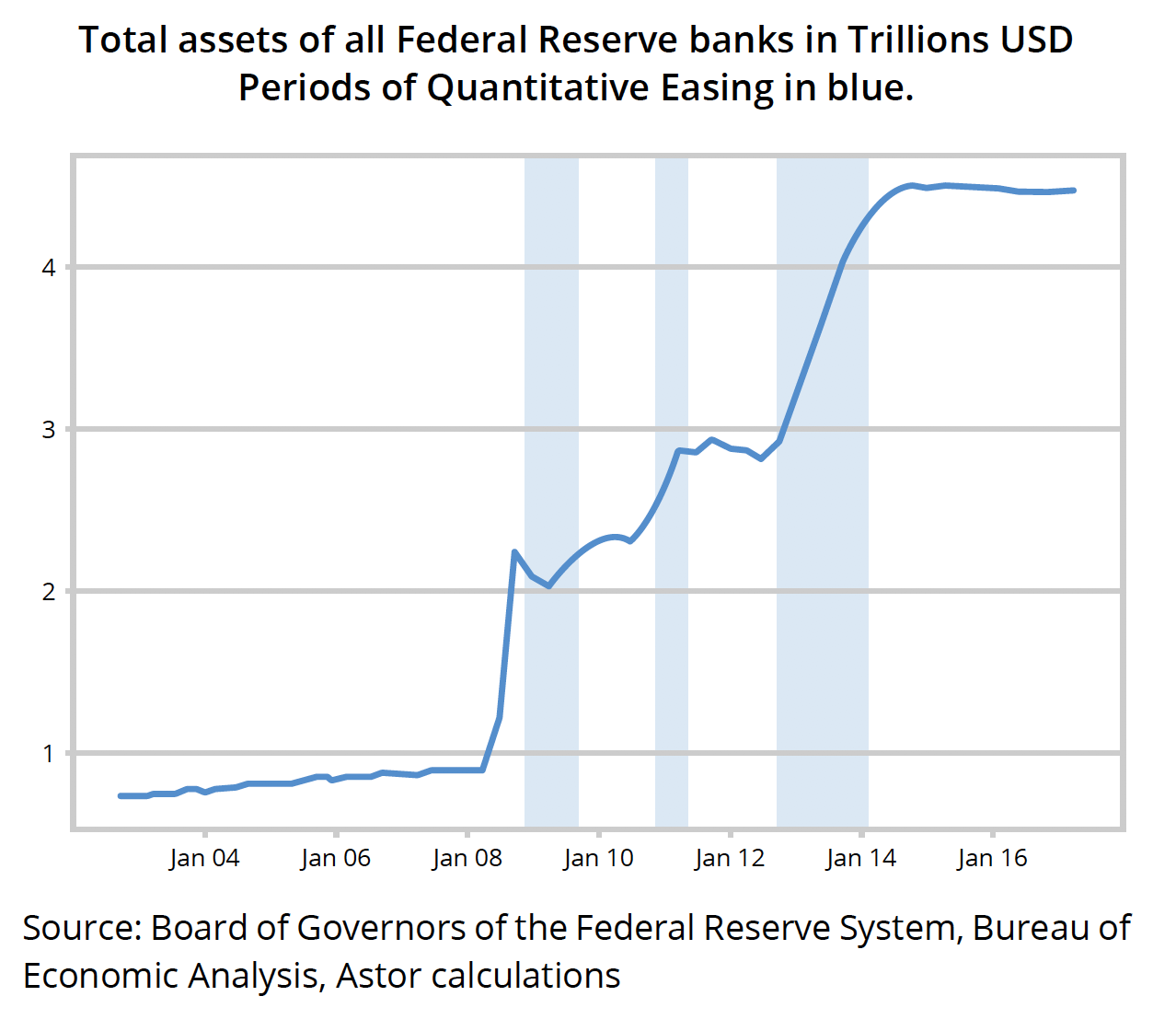 I hope that the FOMC members, so voluble on so many topics, see fit to talk in detail about where they see the balance sheet stabilizing.  Be that as it may, the pace of reduction and the guesses about the end-state imply that the Fed will allow the balance sheet to shrink gradually for about five years.

The Fed’s normalization statement pointed out that while it expects to use the federal funds rate to fight any recessions, the FOMC may restart reinvestment in the event of substantial interest rate cuts. If that occurs, that statement may serve as a signaling mechanism much like QE did.  That is, some part of the effectiveness of QE was as a form of forward guidance.  Basically the Fed told the market that it would not raise rates while it was buying bonds in the open market, and it promised to buy bonds for a certain period of time. That gave the market the assurance that the Fed would not raise rates for at least the length of QE. Going forward, if the Fed were to restart reinvestment, it may serve a similar psychological purpose.

I do not expect sharp or substantial increases in bond yields as the result of the end of reinvestment.  Various estimates put the effects of QE at about 100-200 basis points in the very short term, perhaps dissipating somewhat over time.  As we will see in the next section, the US has plenty of reasons for low short-term rates.  Combine that with low and steady inflation expectations, and there is good reason to think that long-term rates are mainly low for “natural” reasons.  Witness, too, the sedate bond market since Fed Chairman Janet Yellen put balance sheet normalization on the agenda in her June 14th press conference.

Where will short term interest rates top out?

In the twenty years ended 2007, Fed funds averaged 4.85%.  Absent a sustained rise in inflation, I do not expect rates will reach that level over the next five years.  Even after the Fed has reduced its balance sheet, rates will likely remain low. The US trend growth rate is believed to have shrunk to about 2% per year.  This estimate is nicely illustrated by the FOMC’s poll of its own voting members who expect longer run growth to be in the range of 1.8-2.0%.  By way of comparison. GDP annual growth averaged about 3% in the 20 years ending in 2007.

The expectation for lower average growth in the years ahead is due to low productivity growth and the aging demographic.  The productivity slowdown is not entirely understood, so it is possible that a productivity acceleration could mean a pick-up in growth in years ahead. For now, though, it seems that the slower trend growth will contribute to interest rates being lower in the years ahead than we might have expected. Another factor is also demographics—namely increased life expectancy in the US.  A longer life tends to increase savings, which then increases the supply of funds destined for the fixed income market.  (The relationship between economic growth and interest rates is discussed in this speech by Federal Reserve bank of San Francisco President John Williams.)

Both supply and demand for interest rates suggest that they will remain low in the future.  Again, we can look at the FOMC’s poll of its own members who see short-term interest rates around 3% in the long run.  Of course, the Fed may need to raise rates above that level to respond to bouts of inflation, but with inflation missing for so long, it seems unlikely right now.

The Fed’s normalization of its balance sheet is intended to be a dull affair.  As long as no recession intervenes, in my view the Fed will also continue to raise interest rates over the next few years.  I expect short-term interest rates to top out at very low levels compared to the period ending 2007.  It would take inflation surprises to make me change my view.