Dimensioning the Impact of the U.S.-China Trade Dispute

There is no shortage of whiplash-providing economic and geopolitical risks to pay attention to these days. For some time, market participants were focused on Federal Reserve policy and the (still) ongoing Brexit negotiations. Of late, however, the market narrative and risk tolerance are driven more and more by growing concerns around the U.S.-China trade war. Research suggests that further escalation will result in a marked slowdown in global trade and growth.

The conventional wisdom since President Trump’s election has held that the ongoing trade dispute is more smoke than fire – given domestic political realities in both countries, both Trump and Chinese President Xi would reach a face-saving agreement that would allow both parties to claim some degree of victory. Heightened tensions and subsequent rounds of tariffs have since thrown that conclusion into question. The extent to which the market has or has not priced in a long-term trade war is unclear, but it seems fair to say that greater risk aversion will result from further escalation.

The path to the present day has been a tumultuous one. The first salvos were fired in earnest by the U.S. in April 2018 with a 25% tariff on all steel imports (ex. Argentina, Australia, Brazil, and South Korea), and China responding with 15-25% tariffs on $3bn worth of U.S. goods. Trade talks continued through June before ultimately breaking down, leading to the U.S. imposition of 25% (List 1) and China answering in kind. Dialogues broke down again in August 2018, leading to an additional 25% tariff on $16bn (List 2) of goods. List 3 tariffs of 10% on $200bn worth of goods were introduced in September. Despite the temporary truce announced in December 2018, and ongoing trade talks in May 2019, List 3 tariffs were raised to 25% in late May. In sum, the U.S. has imposed tariffs on $250bn worth of Chinese goods, with China imposing tariffs on $110bn worth of U.S. goods. 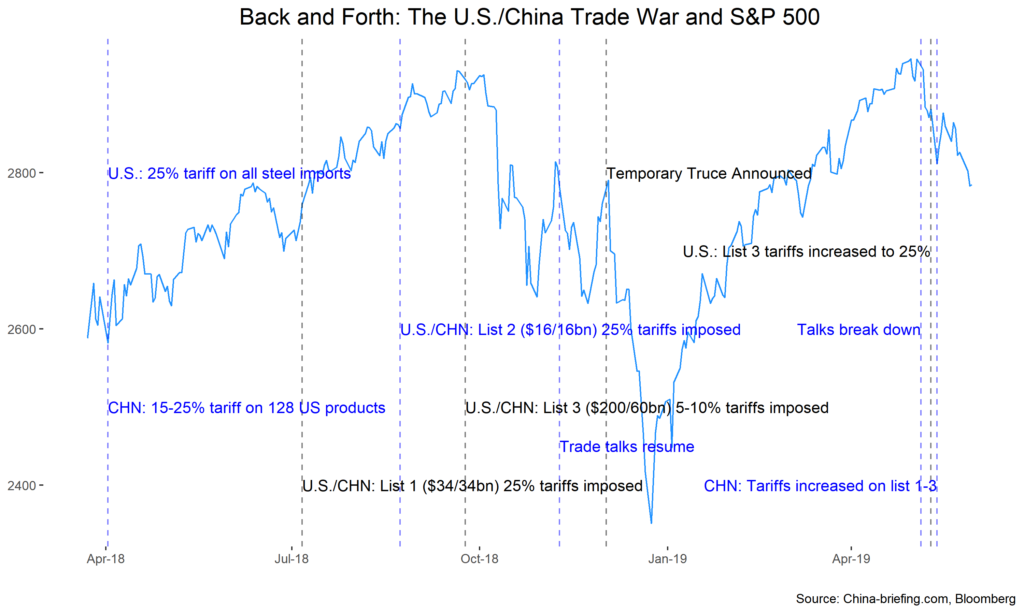 The impact of these tariffs can already be seen in export data from China and the United States. U.S. exports to China have dropped by about 25% year over year. The U.S. trade deficit in March narrowed to its lowest level in three years, although causality can be tricky to tease out. 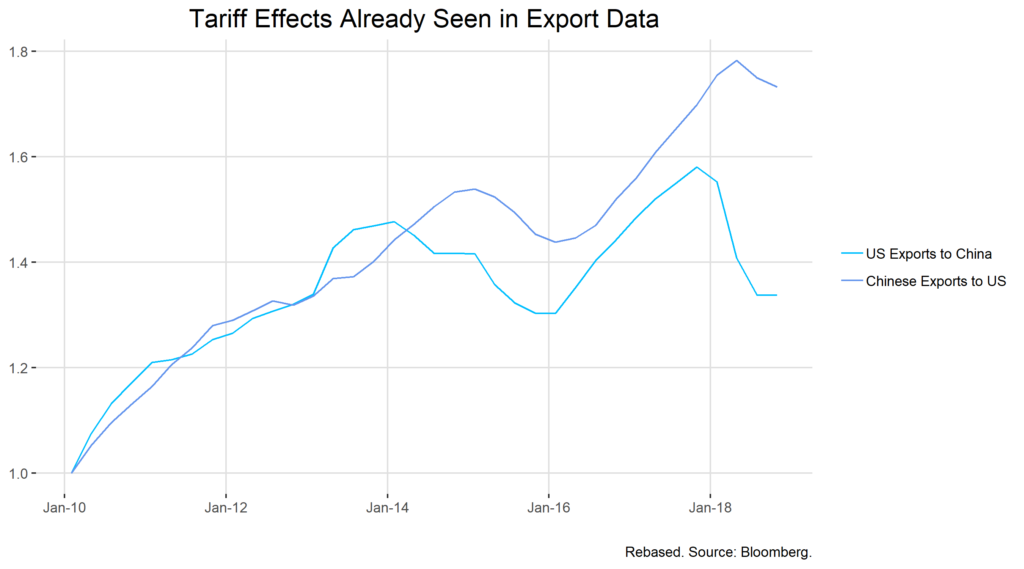 In a research note earlier this month, the OECD considered three possible scenarios when dimensioning the impact of the tariffs on trade and GDP. The first scenario, which has since occurred, is the raising of List 3 tariffs to 25%. The OECD estimates that as a result, world trade will be lower from its baseline projection by 0.2%. 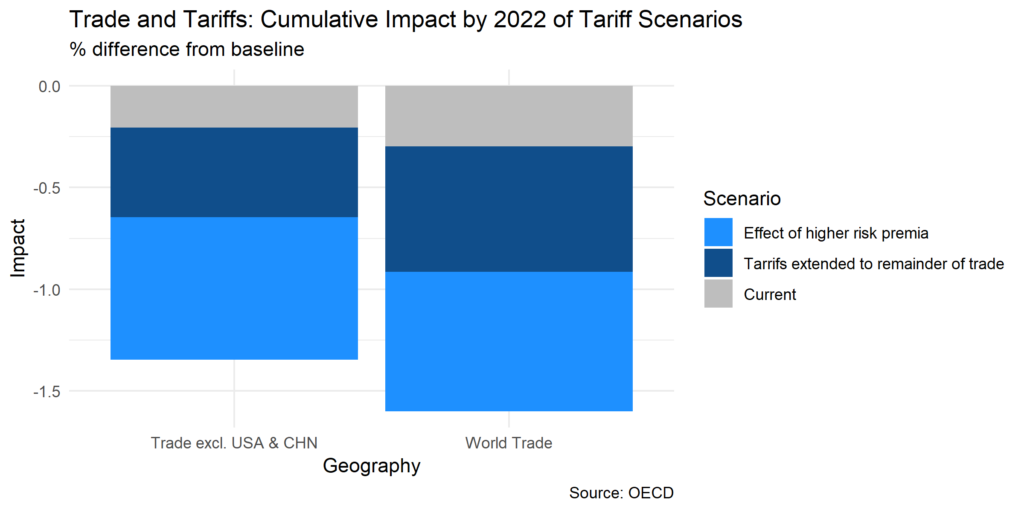 Despite the much-ballyhooed shift to domestic consumption, China’s economy remains export orientated, with exports contributing to about 20% of GDP. Approximately 19% of Chinese exports end up in the United States, and so China certainly has more to lose in a trade war in the United States – a fact that has no doubt encouraged the U.S. administration’s aggressiveness in righting perceived wrongs.

Potential tariff impacts on the Chinese and U.S. economies are unwelcome but largely manageable should economic growth remain at trend, and given each country‘s closer export ties with neighbors and the European Union. Estimates for impact on growth suggest lower output in China of 0.5% and in the U.S. of 0.2% at current tariff levels. Should tariffs be extended to all trade, Bloomberg estimates a drop of 0.8% and 0.5%. A corresponding increase in risk premia increases the decline to approximately 0.9% and 0.7%. 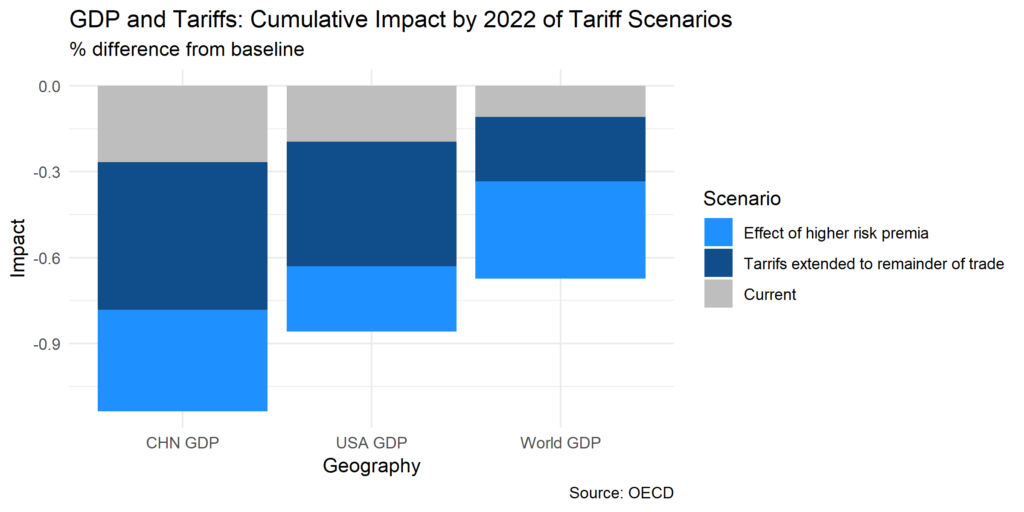 It is feasible that Presidents Trump and Xi will reach an agreement in the coming weeks, but it is also possible that the worst is still to come. Tariffs garner headlines, but the worst economic weapons have yet to be wielded in the trade dispute. On the U.S. side, the administration can apply substantial pressure by blacklisting firms like Huawei and ZTE from dealing with U.S. companies. Meanwhile, China is a large holder of U.S. Treasuries after amassing massive foreign exchange reserves following successive years of current account surpluses. China could thrash the treasury market by dumping its holdings, but it seems unlikely that the Chinese would do so, given the self-inflicted damage it would cause.

Ultimately, of course, these costs are borne by consumers in both countries. The NY Fed estimates that U.S. importers pay an additional $8.8bn a month in added tax costs and deadweight losses. As a result, the total annual costs of tariffs to the typical household amount to $831. 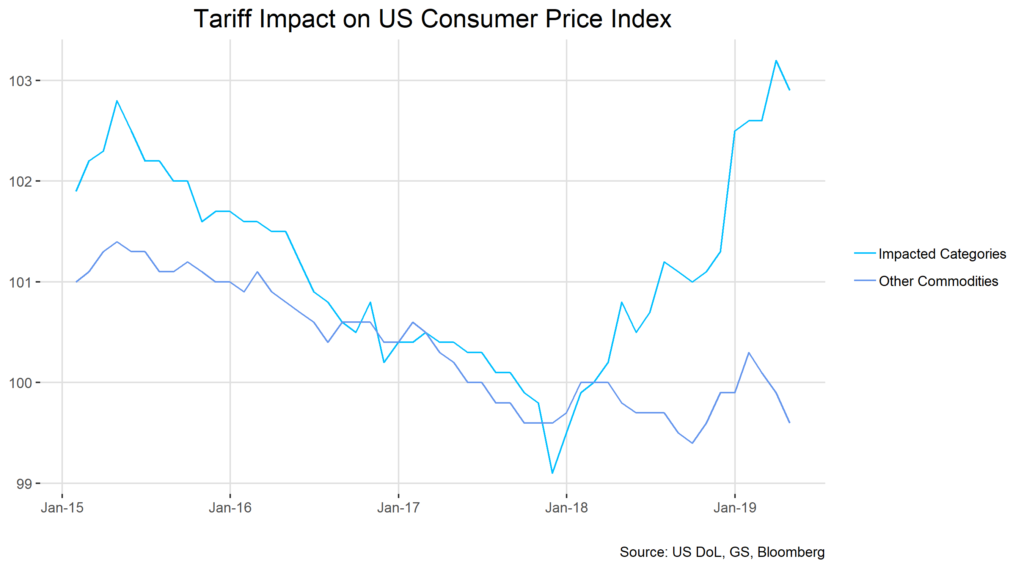