A tale of two markets

Two authors I respect very much have post I would like to argue with a bit. The different response to the US economy to dramatic stock market declines in 2000-2002 and 2007-2008 is very interesting, what does it tell us about the US economy?

Cecchetti & Schoenholt say that the story is all about leverage in the financial system and surely that is part of the story. In Mian & Sufi’s excellent book House of Debt tells a story I find more convincing about leverage. The key thing is not how much debt is held, but who is holding it.       Yes, banks had leveraged exposure to US real estate prices in the period leading up to the Great Recession.       Consumers, however, had a great deal more exposure to relative to shock-absorbing assets. Mian & Sufi argue that the lower income consumers who had borrowed to buy homes were forced to dramatically curtail their spending after the decline in price of homes they bought with borrowed money.

Imagine you make $10,000 a year and you make a $10 bet. If the bet turns out against you it would not affect your lifestyle very much. Now imagine the losing bet was $1,000, in this case your pattern of spending would have to change a great deal.

Mian & Sufi make a case that this is exactly what happened in the 2007-2009 crisis. Debt acted as “anti-insurance” – focusing losses on those least able to bear them, with results that are readily understandable in retrospect, even if they were not well understood at the time.

How much debt was added and are we back to more sustainable levels?     Since 1980 the Federal Reserve has published data about debt relative to income. 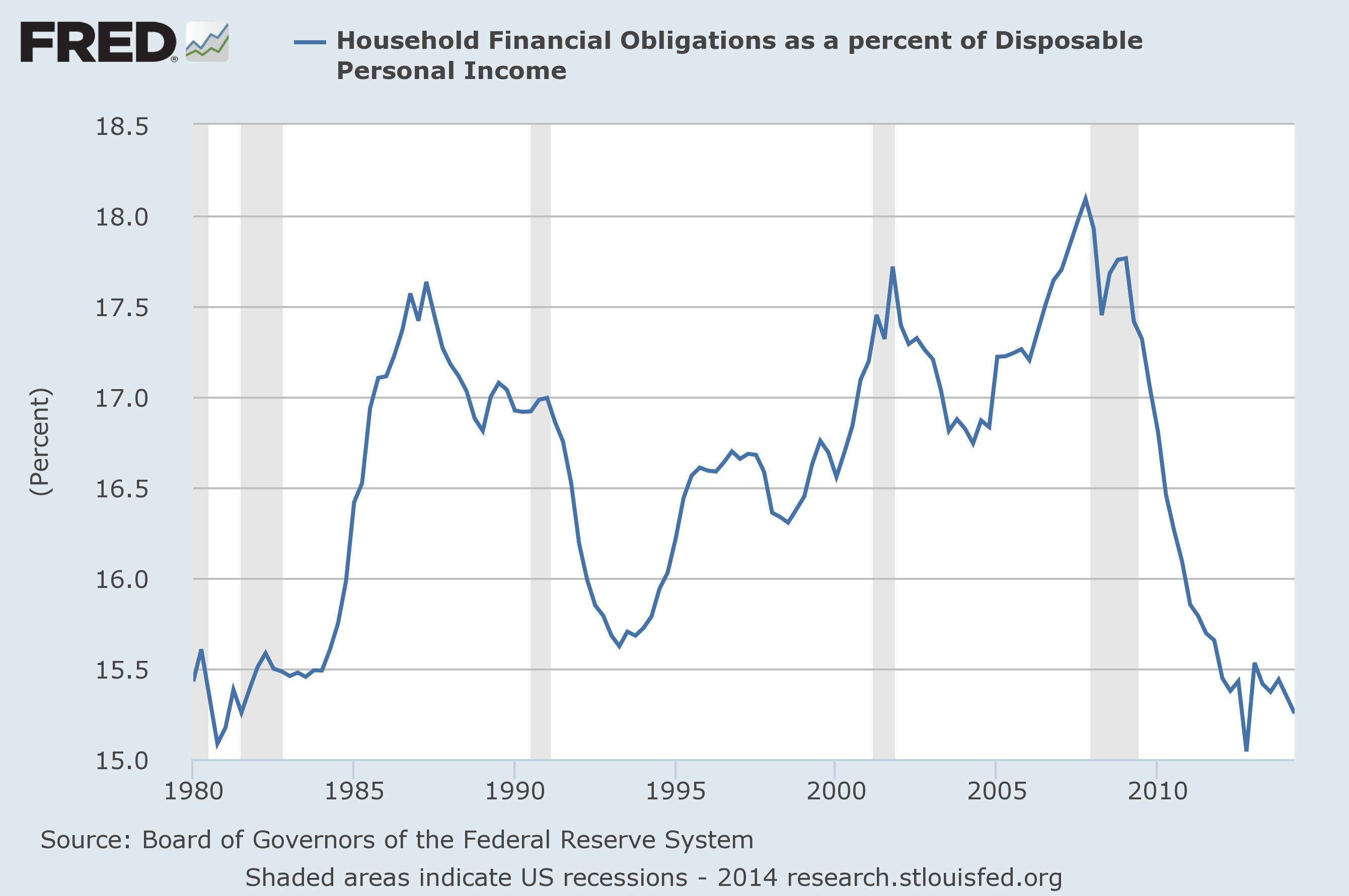 We can see that the total of all interest payments (mortgage, student debt, credit cards etc) as a percentage of income has swung from a high over the life of the series in 2007 to a new low value today – a function of the mixture of lower interest rates and lower rates of debt. As this measure has been fairly table for several quarters, it seems that consumers do not feel the need

I recommend House of Debt (or their academic writings, accessible here) to everyone in the financial services industry, that Cecchetti & Schoenholtz talk about asset returns on the economy and not to mention the composition of the debtors shows that their work has yet to be fully appreciated.